The beginning of every Hijri month is marked by the birth of a Crescent. The new Crescent is the very first phase right after the totally dark moon phase called “New Moon”. This year, we would like to explain how the moon should be sighted, what are the accepted methods in Islam and the differences that occurs around the world due to different Islamic views and astronomical difficulties

What is Moon Sighting?

Given that the sky is clear, or at least nothing is clouding the west, the Crescent that marks the start of a Hijri month can be sighted at the sunset time of the 29th of the previous Hijri month. It is usually a challenge as the Crescent appears on the horizon right beside the setting Sun (south from the Sun). It is difficult to spot the Crescent because of the Sun’s glare that visually distorts the Crescent's details, and the Crescent being so thin that it can appear as an optical illusion. 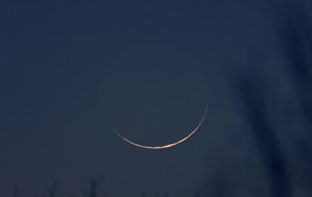 The photo of the Crescent is magnified

Both ends of the Crescent should point upward and towards the South. Moon sighting should take place on an elevated position such as a mountain or a hill where the farthest horizon is visually reachable, no obstructions like hills or buildings. Best option is an elevated position overlooking a sea or an ocean. After the dusk, the Crescent goes below the horizon with the Sun.

If the Crescent was not sighted during the dusk, the current Hijri month is complemented to be 30 days.

‍Who can sight the moon?

Any Muslim can testify to have sighted the Crescent. But to accept the testimony and announce a verified sighting, the Muslim has to be of a good character.

A Muslim of good character is the one who is known to the Muslim community to be always inclining to Istiqama (righteousness), denouncing and completely avoiding the major sins (Kaba'er), does not normally accept or take lightly the small sins (Sagha'er), does not use prowess to claim false reputation and careful enough in day to day dealings to maintain good relations with all people.

عن ابن عمر رضي الله عنهما قال:
"تراءَى النَّاسُ الهلالَ، فأخبَرْتُ رسولَ اللهِ ﷺ أنِّي رأيتُه، فصامَه، وأمَرَ النَّاسَ بِصِيامِه"
الألباني في صحيح أبي داوود | 2342
Ibn ’Umar (May Allah be pleased with him and his father) narrated
‘The people were trying to sight the new moon (of Ramadan.) and when I reported to the Messenger of Allah ﷺ that I had seen it, he fasted and commanded people to fast"
Al-Albani in Sahih Abi Dawood | 2342

There are a few ways the astronomical sciences and equipments can be used for determining the beginning of the Hijri month:

When it is affordable, it is used to look for the Crescent in difficult weather conditions or high Sun glare. In some cases, Muslims use it to verify the Crescent sighted with the naked eye. 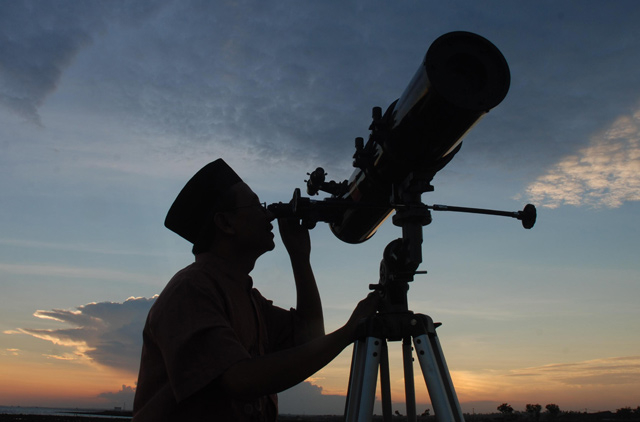 In forecasting, it is decided that a certain day in the future will mark the beginning of the Hijri month, using pure astronimical caluclations. 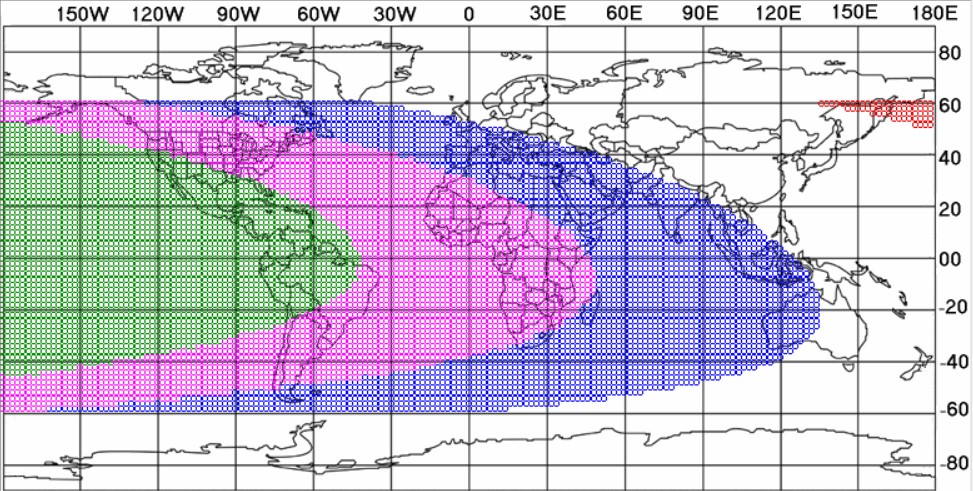 Example: Moon sighting probabilities in
the 5th of May 2019
www.astronomycenter.net

The correct opinion which must be acted upon is that indicated by the words of the Prophet Muhammad ﷺ (peace and blessings of Allah be upon him):

To observe and look for the Crescent in the west horizon during the dusk time while the Sun is setting. Right on spot. That is the basis for determining the beginning and end of any Hijri month in Islam.

It is like any another commandment in Islam, this is the way described by Allah in the Quran and by prophet Muahmmad ﷺ in the Hadith. It is the Sharee’ah with which Allah sent our Prophet Muhammad ﷺ (peace and blessings of Allah be upon him). It is universal and everlasting, until the Day of Resurrection. It is valid for every time and place, whether worldly sciences are advanced or otherwise, whether there are telescopes or not, whether there are scientists who are able to do astronomical calculations or not.

Allah knew that the astronomers would develop their science to the point where they would be able to calculate the positions of the stars and heavenly bodies. Yet, the description of the way to determine the first day is crystal clear when He said in the Quran (interpretation of the meaning):

Some people take that the meaning of "شهد" in the Ayah, which translates to "witness", as "witnessing" the start of the Hijri month by "witnessing" the result of the astronomical calculations forecasting a future day to be the first. But this "metaphoric" interpretation is not correct becuase it contradicts with other confirmed Hadith which states that the beginning and ending of Ramadan are connected to the actual sighting of the moon.

"The Muslims are obliged to follow what Allah has prescribed for them through His Prophet Muhammad ﷺ (peace and blessings of Allah be upon him), basing the beginning and the end of the fasting on the sighting of the moon. This is the consensus of the scholars, whoever differs with this and relies on calculations is (“odd”) and his opinion cannot be relied on"
Sheikh Ibn Baz

What about Um Al-Qura Calendar

In Saudi Arabia they have two calendars. The first is called Um Al Qura Calendar. This calendar is issued at the commencement of every Hijri year. It is based purely on astronomical calculations. This Calendar is not Sharee'ah compliant, especially for Ramadan. But they do not use it instead of Moon sighting. It is used barely to plan ahead the financial year, to help people map the Gregorian with the "expected" Hijri dates. Like someone who is planning to take time off work next Ramadan, he will need references to the mapped dates.

The other Calendar is a record of the Moon Sighting results, one by one.

People should not go to great lengths and expenses to sight the moon with telescopes and similar vision aid tools. It is an unnecessary cost since the requirement is to sight the Crescent with the naked eye.

However, if a person among the people who are observing the moon was certain that he has spotted the Crescent by a telescope or any vision aid equipment, and he is a Muslim known by the community to be of good character, then his sighting of the moon should be followed. Because it is still a visual on-spot sighting, not a calculation.

What else could be done in case it was not sighted?

In case the moon observers did not sight the Crescent, Muslims can check with other Muslims in other areas that share the night. In Australia, we can contact Muslims in New Zealand, Indonesia, Malaysia, Japan, etc. 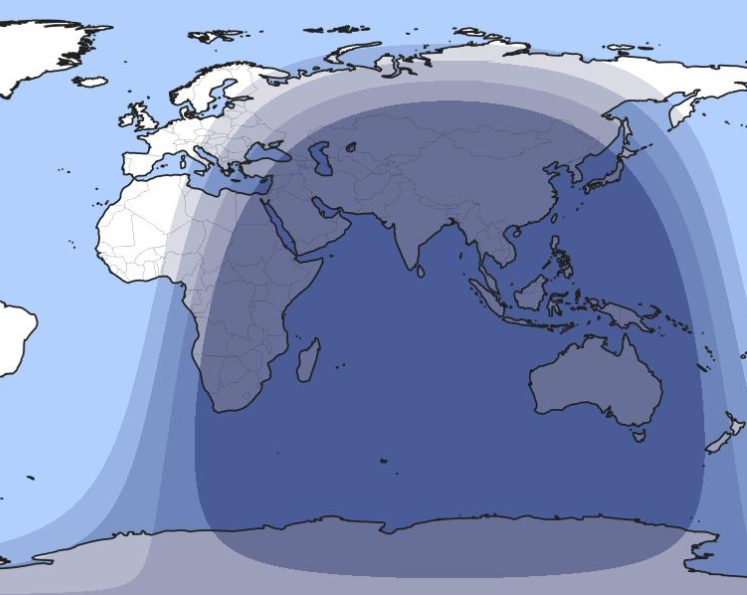 Why Muslims are not united in Ramadan’s first day?

The Hanbali, Hanafi and Maleki took the opinion that if one Muslim sighted the Crescent, it is imperative that all Muslims around the world should consider it as the first day of Ramadan. While the Shafi and many other Muslim scholars said that the sighting in one area does not mean other areas should follow, which is also the opinion adopted by Sheikh Ibn Etheimeen.

People observing the Crescent around the world will not have equal opportunities to sight it due to the geological and astronomical factors. To use a close analogy, Sun eclipses. Not all people on earth can witness the sun eclipse. And those who can, they see different angles of it. That is why many Muslims around the world would perform the Kusuf Prayer (Eclipse Prayer) while other Muslims do not. Because there is no Kusuf in their sky.

However, if any country in the world announced that they received verified testimonies sighting the Crescent, and it is obvious that the announcement has no odd agenda, political or otherwise behind it, then we should follow. Because there are no restrictions in Sharee'ah that says otherwise, at least for Muslims in places that share the night time.